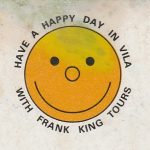 The kava company was founded by the Late Frank King Senior in 1999. Mr King, originally from England, moved to Vanuatu from Tasmania in the early seventies and set up one of Vanuatu’s first ever tour operations called Frank King Tours.

He owned a boat called the L’Espadon and operated glass bottom tours in Port Vila Harbour. During this time, he had set up a lot of the tours that are now very popular tours in Vanuatu including the Mele Cascades Waterfall and the Land Diving Tours to Pentecost Island.

The tourism business office along with three other businesses were dissolved to ashes on May 12th of 1999 when it was burnt to the ground in Port Vila. There was not a thing that survived the fire which forced Mr King, a hefty kava drinker, to use his well-established tourism network into a partnership business of buying  kava from the outer islands .

By  this time, Mr King contributed to  many of what is now known as literature in Kava and was a common name in many important kava events across the region and globally.

As Kava Traders, the company first commenced its trading in the early year two thousand until 2004 when Mr King lost his fight to prolonged illness. With Mr King Junior at the helm, Kava Traders was closed due to many unforeseen misfortunes from King Senior’s reign.

The Kava House was registered and set up its premise on  Mele Road , just outside of Port Vila in 2009. At the Kava House, it is the people that count!

We have invested in our team by giving team members opportunities to grow professionally, take care of themselves, each other, their families and make a difference in serving our customers and communities.

What sets Kava House apart from our competition is our people and their passion for providing top quality Vanuatu Kava product range accompanied with the best customer service.

We aspire to promote Vanuatu’s noble kava varieties by setting high standards of product finishing, quality control and service delivery to our local and international customers.

Most of our employees originate from Mele and a handful from outer islands. Vanuatu being relatively new to manufacturing and product handling, ongoing training and education is paramount. Employees from outer islands come from main kava producing islands in the condition they acquire knowledge on kava processing to enhance their understanding of our products and upon return to their homes, they can further train farmers on how to improve their produce yields.

We also endeavour to provide a platform for our female staff to be represented within the organisation. From its early days till present, there is now approximately forty percent female representation in our team who are involved in grading, cleaning and packaging of kava processing. We encourage farmers to cultivate the plant for mass production and utilise their land to make an income. We encourage local farmers to remain in the outer islands where they have land and can further develop their resources to support their families and communities. This provides them an outlet to   have access to what the urban area can provide through their kava farming efforts. Most of our indigenous growers are subsistence farmers who rely heavily on their produce for revenue. Their hard-earned income is then transferred via Vanuatu’s National Bank or upon request, compensated with goods, fuel and equipment that are otherwise scarce in the islands. All produce handling from growing right up to packaging is done by local people who take pride in the ownership of this resourceful plant. The five core values that make us are of top priority to the establishment and its operations. We aim to ensure that the Kava produce we use is grown in organic conditions by indigenous farmers utilising traditional cultivation and harvesting methods. The rest of the production process is then completed by local staff who take ensure that the finished goods are well represented and meet the standard of the international clientele. The cultivation of kava involve and encourages women to be part of the kava process. Although it is not always emphasised, we acknowledge that women in our rural communities are very much in the value chain just as much as men are. Once the harvest is completed, much of the cleaning and drying is overseen by women. This journey allows them the chance to be part of decision making and promotes leadership  and empowerment. Our premises are located on Efate, along Mele Road just outside of Mele Village. Located on less than 2 acres of land, the grounds have a warehouse housing offices and storage. There are two solar driers at the entrance of the building. The water supply  structure includes a ultra-violet water system for treatment of water at kava washing. An artery contains mini staff facilities complete with a nakamal as a resting hut.The warehouse contains two offices, a retail shop and a mezzanine floor for extra storage. The large parking area caters for movement of shipping containers for goods to be exported overseas.

Closed on Sat/Sun & Public Holidays unless on special  request

Our Vision: The Kava House aspires to source top quality Kava produce that is organically grown from indigenous Vanuatu farmers, processed, packaged and delivered by local staff with top customer care service to the domestic and global market.

Our Mission: At The Kava House, we strive to be Vanuatu’s premier Kava producer in the market, sourcing top quality dried Kava that is organically grown in the volcanic islands by providing farmers with Kava plant education and general business management skills. We encourage farmers to remain on their island of origin and cultivate their land for cash crops such as kava while we support them with ongoing advise and expertise.

The National Kava Strategy of Vanuatu indicates that the main elements affecting the kava sector are quality and quantity. Over 74% of the Vanuatu households live in rural areas  More than 80% of the  population rely on agriculture for daily subsistence and wellbeing . With over twenty years of experience in dried kava production, The Kava House is a leading supplier of organically grown kava. Our products involves a lot of indigenous people in the chain of production ensure that traditions are preserved and communities are being supported. We support the National Kava Strategy ‘s vision of being a leading producer of organic kava in the region and the world. A nakamal is traditionally a meeting place where the chief and his people gather  for meetings, feasting and festivities. A nakamal or nasara in Efatese is a representation of a tribal meeting place. In modern day this is commonly referred to where kava is commonly drank. The kava nakamal recapitulates in an urban setting some of the traditional forms and manners of kava drinking. More than half of our staff are youths from the Mauriki Football Club of Mele Village. Currently in the second division of the Port Vila Football Association, Main aims of our support is to  provide programs and activities for aspiring youths to participate in football. We help promote good sportsmanship through team work and discipline by encourage talents and skills of youngsters from mixed heritage. In so doing, we empower players through leadership and management.   This support is reciprocated for the women’s team as well.

We support the Vanuatu House of Refuge Ministries who have establishments in Mele, Erakor and Pango Village on the South of Efate and a mission in Malekula in Warlep Village. The ministry’s primary goal is to provide guidance and directives for spiritual well being. In the process providing programs for youths to be engaged in capacity building activities for inspiration and empowerment. Other activities for women include physical activities for healthy lifestyle and reduction of Non-Communicable Disease. There have been  Financial Literacy and Business Management for self reliance and independence. There are programs for Men, Women and Youth Groups all over Vanuatu and an annual conference bringing in members from Australia and New Zealand. Its main headquarters are situated in Mele Village. The Kava House is a member of the Vanuatu Kava Industry .Initially, the VKIA was known as the Kava Industry Working Group (KIWG) for Vanuatu. Established in 2013 by the PHAMA program, the KIWG was established to provide a focal point for technical discussions and ongoing assessment of industry needs. Additionally, the group was also developed to broaden and deepen the engagement with the stakeholders from both the public and private sectors including farmers and other groups involved in the kava value chain. These Public-Private Partnerships have worked well to develop key activities for the kava industry in Vanuatu particularly in developing quality standards and raising awareness on the important role kava plays as a commodity. The Pacific Horticultural and Agricultural Market Access Program (PHAMA) provides practical and targeted assistance to help Pacific island countries manage regulatory aspects associated with exporting primary and value added products. This encompasses gaining access for products into new markets, and helping to manage issues associated with maintaining and improving existing trade.(insert:Kava_FS_Overview9/Kava Value Chain,Gender Equality and Social Inclusion analysis)

The Kava House is a member of the Vanuatu Chamber of Commerce and Industry. VCCI is the advocate, representative and supporter of the business community in Vanuatu. Established in 1995 under the “Chambers of Commerce & Industry of Vanuatu Act”, VCCI represents over 1300 members of the business community. All businesses who hold a valid business license in Vanuatu are automatically granted membership to the VCCI through payment of annual fees to the Government.

As the national voice for the private sector, VCCI represent the interests and concerns of members by lobbying and advising the government at local, provincial and national levels  for changes that will make Vanuatu a better place to operate a business, and hence contributing to the development and growth of our Vanuatu’s economy. At The kava House it is our repoonsibility to ensure that we adhere to the employment requirements of Vanuatu (see insert: VCCI_Cap_Act236)

In order to be able to export into the US, The Kava House has had to be able  to comply with FDA requirements. We have been able to supply the US for over ten years and for that we are proud that we meet the US Food and Drug Administrative Standards .The Food and Drug Administration (FDA or USFDA) is a federal agency  of the United States Department of Health and Human Services, one of the United States federal executive departments. The FDA is responsible for protecting and promoting public health through the control and supervision of food safety, tobacco products, dietary supplements, prescription and over-the-counter pharmaceutical drugs (medications), vaccines, biopharmaceuticals, blood transfusions, medical devices, electromagnetic radiation emitting devices (ERED), cosmetics, animal foods & feed[4] and veterinary products. The FDA was empowered by the United; States Congress to enforce the Federal Food, Drug, and Cosmetic Act, which serves as the primary focus for the Agency.